According to Worldometer, there are about 7.3 billion people in the world today. Bangkok, Thailand is the 15th largest city in the world with about 14.3 million people. Even with this data, it’s humbling to me how small the world may be at times. 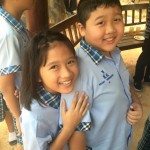 My daughter, Anne Gaslin, is away for this year teaching fourth grade in Phuket, Thailand. During her first semester she learned a lot and had a favorite student named, Frank. He is pictured above with his sister.

Young Frank became something of a Facebook phenomenon via Anne’s photo chronicles of his funnier antics during the semester. I doubt that there is a kid in Thailand with more “likes” on FB photos than Frank. Anne’s friends are all in love with Frank and our family became a bit enamored with him, too.

Right now, I am sitting near the beach in Phuket, Thailand looking out at the amazingly tranquil and serene Indian Ocean. It’s about 7:30 am and most of the people in our resort are still sleeping soundly. To get here from our home in Eden Prairie, Minnesota it was a series of flights from Minneapolis to Narita, Japan for 12 hours, Narita to Bangkok, Thailand for 8 hours and finally a quick, one-hour

We use cookies to ensure that we give you the best experience on our website. If you continue to use this site we will assume that you are happy with it.Ok